Funding to OHHA cut as of March 31 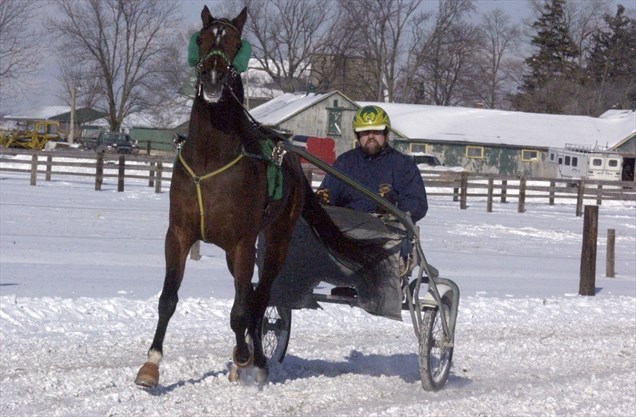 Flamborough’s Jim Whelan trains a trotter in this 2005 file photo. The president of the Ontario Harness Horse Association, Whelan said OHHA, which had its funding cut by Ontario Racing, is the best organization to support horsepeople in need. – Metroland file photo

Members of the Ontario Harness Horse Association (OHHA) are vowing to fight a cut to their funding directed by Horse Racing Ontario.

The decision, which was handed down to OHHA in a letter Jan. 31, will see Woodbine Entertainment Group cease paying OHHA a portion of the purse amounts, effective March 31. Instead, the funding will be directed to the Central Ontario Standardbred Association (COSA).

Campbellville’s Brian Tropea, the general manager of OHHA, said if the cut is not reversed it will mean the end of the association — which represents the vast majority of standardbred horsepeople in Ontario.

“If somebody is going to make decision about who is going represent the horsepeople in the future, it should be the horsepeople that do it.” — Brian Tropea“Our members are ready to fight Ontario Racing and Woodbine Entertainment Group’s decision to end our association.”

He said it is important to let their membership know they aren’t going anywhere without a fight.

“But at the end of the day it should not be the racetracks that are determining who the representative organization is going to be.”

Tropea said the situation would be similar to an automaker deciding it can’t get along with a specific union, so its workers’ union dues would instead go to a different union group.

“Ultimately, what they’ve done here is say, ‘We don’t want OHHA because they have an opinion on things and they’re willing to stand up for the membership,’” he said

OHHA was formed by horsepeople in 1962 to represent the interests of standardbred racing in Ontario at all levels of government, Tropea said.

He said the association was meant as a counterbalance to the power that racetracks traditionally held.

Tropea said OHHA negotiated with racetracks up until 2009, when Woodbine Entertainment Group decided it wouldn’t sign a contract with the association to represent the horsepeople, eventually creating their own association — COSA.

“That group only represented the people who raced at the Woodbine tracks,” he said.

He added the previous Ontario Liberal government, Woodbine and Ontario Lottery and Gaming negotiated a long-term funding deal — without any input from the rest of the industry and the horsepeople.

“It basically gives total control, management and decision-making authority to Woodbine Entertainment Group for the entire industry,” he said. Tropea said many associations, including OHHA, didn’t sign the agreement as they received multiple legal opinions urging them not to sign.

However, he said COSA was happy to sign it and sits on the board of Ontario Racing as the representative of Ontario standardbred horsepeople.

“It’s an attack on democracy,” he said.

Ontario Racing chairperson John Hayes said the organization, which was set up two years ago as part of the long-term funding deal, made the decision to direct funding to COSA because OHHA did not sign the agreement, and therefore is not a member of Ontario Racing.

Hayes said Ontario Racing is in place to help the industry become self-sufficient, adding standardbred horsepeople are represented on the Ontario Racing board by COSA. He said an amount of money was set aside from purses to fund benefits for drivers, trainers and owners

“COSA has thrown its membership wide open — so there will be no horsemen out of benefits as we move forward.”

In response to the assertion that the funding decision is undemocratic, Hayes said it is simply a case of Ontario Racing deciding that its members will receive the funds.

“The members tracks are represented on the Ontario board by the Central Ontario Standardbred Association — it’s as simple as that,” he said. Hayes added he would hate to see money that could be supporting horsepeople be tied up in legal costs.

“In my opinion, I think everything that was done was entirely legal,” he said.

“If our members felt that they would be better represented by COSA, they certainly could have joined that association and sought to have it administer benefits, and insurance at their tracks, and represent their interests,” he said. “Horsepeople know that OHHA is the most effective voice in fighting for the interests of standardbred racing and the best association to provide support to horsepeople in need, and to manage their financial interests as well.”

Moving forward, Tropea said OHHA is planning to explore the association’s legal options, as well as lobby government to reverse the decision. He said the government has the authority to tell Ontario Racing to halt their decision and put a process in place for horsepeople to vote on their representation.

“There may be somebody who can do a better job, but we’re quite happy to throw our hat in the ring and accept the results of whatever membership wants,” he said.

For her part, Flamborough-Glanbrook MPP Donna Skelly said she has met with both Tropea and Whelan and planned to raise the issue with Premier Doug Ford.

“I’ve worked with these people, they’re good people, they’re salt-of-the-earth,” she said, adding most of the horsepeople she’s dealt with are affiliated with OHHA. “I’m going to be raising the concerns that (Tropea and Whelan) raised with me … and make sure that the premier knows it.”

Mac Christie is the Flamborough Review’s news editor. He is an award-winning journalist, who writes about anything and everything within Flamborough. Reach him at mchristie@flamboroughreview.com.

On the fence if the #OEEEP is for you? See what current employers and graduates have to say about the program. #OEEEP is a
July
7
2022

Addition of arsenic, hydrocortisone, and mirtazapine to the Schedule of prohibited drugs in the Regulations and clarification of prohibitions regarding zilpaterol hydrochloride   The Canadian Pari-Mutuel